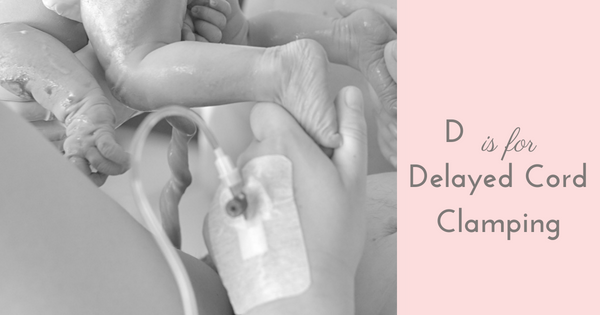 Delayed Cord Clamping is the prolongation of time between the delivery of your baby and the clamping and cutting of their umbilical cord; the delay can range from 30 seconds to 5 minutes or more after delivery. This practice is in contrast to immediate cord clamping, which typically occurs within 10 to 3o seconds of delivery. Doctors previously believed that immediate cord clamping would reduce the risk of maternal hemorrhage. However, research has not proven this to be the case.

Delaying cord clamping allows for the transfer of up to one-third more blood from the placenta to the infant. Greater blood volume is associated with an increase in iron storage and, thus, a decrease in iron-deficient anemia. Iron is vital for healthy neurological development and low iron levels can cause problems with the central nervous system. The additional blood the baby receives can provide them with as much as a 4-6 month supply of iron. The World Health Organization (WHO) now recommends waiting no less than one minute before clamping, and ideally waiting 1-3 minutes, for all births.

A 2017 study by the American College of Obstetricians and Gynecologists found that “delayed umbilical cord clamping increases hemoglobin levels at birth and improves iron stores in the first several months of life.” While there appeared to be a slight increase in the incidence of jaundice, it was felt that providers who practice delayed cord clamping in term infants should have a plan in place to monitor for and treat jaundice.

The following are the current ACOG recommendations regarding the timing of cord clamping:

Research is still unclear if there are any potential detriments to the health of the newborn from delaying cord clamping. Some studies have found an increase in the incidence of jaundice in infants who’s cords were not immediately clamped. A build up of bilirubin, a by-product of red blood cell breakdown, causes jaundice. A pediatrician can easily (and non-invasively) detect and treat phototherapy.

Another potential risk is polycythemia, which is an elevated red blood cell count. One study found higher levels of red blood cells in babies with delayed cord clamping. This study looked at a rather homogeneous population outside the United States. A Cochrane meta-analysis did not support the findings of the aforementioned study.

Some providers try to argue that they do not have enough time in the delivery room to delay cord clamping. The placenta transfers half of this additional volume within one minute of delivery. By three minutes, more than 90% of this additional blood volume has been transfused. During this time the placenta has not yet been delivered and little else is happening in the delivery room.

Your provider may not consider delayed cord clamping during a C-section as leaving you open on the operating table for longer than necessary increases your risk of infection.

Unless your baby’s cord is especially short, this is not true. Blood will not flow backwards from baby to placenta if baby is higher than the placenta, as previously thought. This is untrue for several reasons:

Should I ask for delayed cord clamping?

That is a decision that only you and your OB/GYN or midwife can make, depending on the health of you and your baby and the circumstances surrounding your baby’s delivery. Have this discussion prenatally with your doctor or midwife to ensure your birthing team is on the same page.

It is important to note that none of these studies have included infants who were born in distress. Some researchers believe that this population may actually benefit from delayed cord clamping as the increase blood volume can help with blood pressure, breathing, and circulatory problems. Placental blood is rich in stem cells; this could help repair damage suffered during a difficult delivery.

This post is for informational purposes only. It should not take the place of consultation with your healthcare provider.